Essay one: Hide and skin production around the world

Raw material - use it or lose it

The leather industry needs its raw material, but this first essay in the Nothing to Hide series shows that, without tanners, farmers, meat companies and society (including some of the most vulnerable societies on earth) would face serious and expensive challenges over what to do with the hides and skins that consumers’ desire for meat generates. This by-product would, otherwise, go to waste.

The size of the world's cattle, sheep and goat herds is greater than many consumers imagine. Demand for meat around the world remains high and is growing in developing economies, and the meat and livestock sectors are important and lucrative parts of the global economy (because meat means money). An inevitable consequence is the high volume of hides and skins that abattoirs have to find a home for. Turning the meat industry’s waste into leather, (a protective, versatile, durable, breathable and beautiful material), is, in the eyes of most of humanity, the best way of dealing with it. This adds value to the animal, creates jobs and wealth and enhances the lives of people everywhere.

In any case, few alternatives exist. Landfill sites fill up quickly these days and are becoming increasingly expensive. Many governments want to impose steep rises in landfill tax; in the UK, for example, standard rates will go up in April 2014 to £80 per tonne of material dumped1, an increase of 25% in two years. The authorities have said specifically that they want to encourage new uses for old material; as people have known since the earliest times, there is no better example of this than using discarded hides and skins to make leather. The theme of this Nothing to Hide essay is to show that the volume of raw material arising from the global meat sector is so great, any other method of disposing of hides and skins would pose serious challenges to the meat industry and to society.

Considering only cattle, sheep and goats (the animals from which most of our meat and in turn leather comes), this paper will go on to present the most up-to-date statistics available for herd sizes and slaughter levels, along with an analysis of the figures.

Across all breeds of cattle, from Alentejana to Xinjiang Brown, the global herd size in 2013, according to the US Department of Agriculture, was 1.03 billion head2. It identifies the countries with the largest cattle populations, with India in first place by a long way with 329.6 million head, followed by Brazil on 209.8 million, China with 104.2 million, the US with 89 million and the 27 European Union states with a combined total of 84.8 million (see Panel 1). For its part, the US Hide Skins and Leather Association (USHSLA) calculates 27 main regions for cattle farming, slaughter and meat production around the world and states, together, they generate 240 million hides a year. 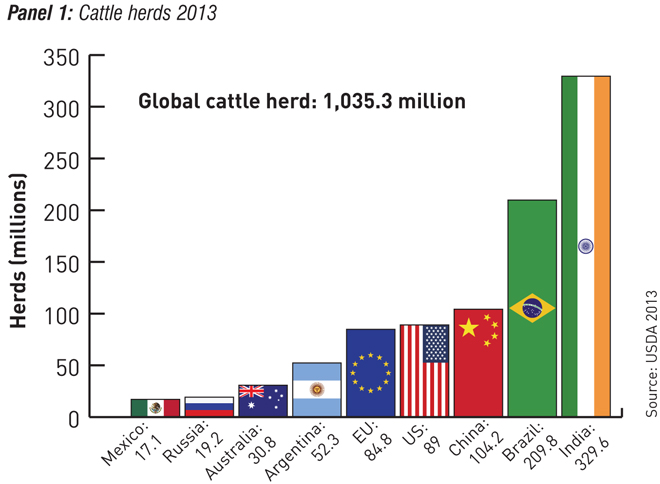 There are large variances, but for the purpose of illustration, it can calculated that hides from bulls, halfway through the year in the northern hemisphere, might weigh an average of 35 kilos, those of dairy cows an average of 29 kilos and heifers an average of 25 kilos, with all weights relating to green hides. The average across all three is around 30 kilos. If we take 30 kilos per hide for this calculation, the 240 million hides a year that USHSLA states abattoirs have to dispose of would weigh 7.2 billion kilos. Again, for this illustration, we can calculate the cost of putting these hides into landfill in countries charging the same rate of landfill tax as the UK at £576 million ($963 million). In this scenario, without factoring in transportation costs and other expenses, it would cost the meat industry more than $950 million per year just to dump the hides it generates into landfill sites.

As matters stand, of course, rather than being an almost billion-dollar cost, the raw hides can earn the meat industry revenue as a result of tanners’ willingness to buy the material, even at the record-high prices seen during this decade, and transport it to leather-making facilities around the world for processing. No one denies that it’s in tanners’ interest to have access to this raw material, but it is equally clear that the meat sector gains, too, by earning money from this by-product and by avoiding the need to take care of disposing of it as waste.

One reason why hide prices have been so high is that herd sizes and slaughter levels are reducing in important markets such as Europe and North America. According to the United Nations Food and Agriculture Organization (FAO), the global cattle herd size was closer to 1.6 billion in the years between 2008 and 20103. The same source gives figures of 1.1 billion head for the world sheep population at that time, with the goat herd size at 881.6 million4. These figures are cyclical and seasoned industry observers have said the national herd in the US, for example, should begin to build back up again in 2014 or 20155, after standing at 89.3 million head on January 1, 2013, the lowest level since 19526. Over time, trends show a steady increase in herd sizes and in the volumes of hides and skins the meat industry is producing from them (Panel 2).

To return to a specific examination of sheep and goats, there is growing demand for dairy products from sheep and goat milk, but demand for cow’s milk is still much higher and, therefore, incentives for farmers to hold back sheep and goat from meat production are fewer. A higher proportion go to slaughter. The FAO put the total annual slaughter for sheep over that period at 542.5 million (almost 50% of the herd) and for goat at 424.6 million (over 48% of the total)7. In the case of both sheep and goat, the figures include young animals.

Sheep and goat skins are a lot smaller than cow hides, but each still weighs around 700 grammes, giving total skin weight of roughly 675 million kilos. Under a similar scenario to the one described above, disposal of these skins into landfill would, in theory, cost farmers or meat companies a total of $90 million a year. An added consideration is that a large proportion of these skins come from slaughter that takes place in the developing world; in the case of goats, in particular, the FAO puts developing economies’ share of annual slaughter at more than 95%. This is significant because few up-to-date waste management strategies are in place in such parts of the world.

According to a 2012 report from PROPARCO, a financial institution, partly owned by the Agence Française de Développement, that aims to promote private investment in developing countries to help societies achieve the Millennium Development Goals, municipal solid waste has almost doubled in volume already this century, reaching 1.3 billion tonnes a year in 2010. This volume is expected almost to double again to reach 2.5 billion tonnes per year by 20258. The organisation’s chief executive, Claude Périou, has said that fast growing urban populations and changes in consumption patterns are driving this increase. Open waste dumps remain the dominant processing mode in developing countries, PROPARCO says, with serious impact on the environment and on people’s health. Every year developing nations spend more than $45 billion on managing their municipal solid waste, and this figure could exceed $150 billion by 2025. Imagine the impact on this situation of adding millions of animal skins to the material that already goes into these open waste dumps. Imagine the effect on the estimated 15 million people in the poorest countries in the world who scrape a living by combing these dumps for material they can sell9.