Why tanners use chrome

Tanning agents based on chromium have been in widespread use in the leather industry for more than 160 years and, because the chromium in the compounds tanners use is in the trivalent state, this is not considered harmful to workers or wearers of leather. As Dr Dietrich Tegtmeyer, a former vice-president of the International Union of Leather Technologists and Chemists Societies (IULTCS), made clear in the original version of this essay in the Nothing to Hide series, the presence of harmful hexavalent chromium can be avoided if tanners and leather chemicals manufacturers treat the materials they use with due care and attention. The same author covered in detail the specific issues surrounding hexavalent chromium in a follow-up essay in the series.

Approximately 85% of all leather that is produced is tanned with a chromium-based process technology. Chrome-tanning was created in 1858, is very flexible, and is one of the best inventions in the history of making leather. It was the basis for the development of the leather business on an industrial scale. If this process is not operated correctly there is a potential risk in terms of toxicity relating to hexavalent chrome, Cr(VI). Since leather is a component in many consumer articles, and because some by-products and waste is generated in the leather manufacturing process, it is an important responsibility on the part of the leather industry to manage and fully control this potential risk. In order to be compliant with today’s sustainability and regulatory standards, it is necessary to ensure 100% safety for people involved in making leather, for the environment, and for the end users of the leather articles.

Huge progress has been made, especially in the last decades, and the vast majority of tanners take this potential risk very seriously. The research and development community is also continuously working on methods to avoid the formation of Cr(VI) so that it will have no negative impact on the environment or people, and to make it possible for tanners to recycle as much chromium as possible.

Unfortunately, a great deal of false or misleading information about the use of chromium in leather is appearing in the media. In these situations, the occasional case of a poorly operated tannery, which is not representative of the standard technologies in our industry, is taken and generalised. An impression is created that chrome-tanning in general is a process that has to be stopped and immediately forbidden.
A balanced view of the concerns, risks and results of scientific studies needs to be taken and placed in relation to the potential risks from using chrome-tanned leather. It is important not to belittle or even hide risks and dangers. However, if a risk is manageable, then correct and accurate information should be provided, to avoid the generation of false information, and leather manufacturers should focus on the application of procedures to address any potential risk.

Chromium is a special element, which is used in various applications. More than 95% of chromium is used outside the leather industry, and only a small portion of all mined chrome ore ends up in leather. The vast majority finds its application in premium stainless steel and chromium-plated articles. This is the reason why the overall recycling rate of chromium is very high. Chromium may even be the element with the highest recycling rate. There are different forms of chromium. The elementary and trivalent or Cr(III) forms are important basic components for many consumer goods as indicated in Panel 1.

Cr(III) is also important in human nutrition. The natural average content of Cr(III) in many woods and in soil is about 3-5 ppm. This is an entirely natural occurrence and not the result of any industrial contamination or application. Cr(III) oxide pigments are also used widely as green colour for tattoos without any harm or hypersensitive reaction to the skin or body.

Chromium as Cr(VI) is an important chemical intermediate to purify chromium for use in the manufacturing of all these applications. In this hexavalent form, chromium is known to be toxic to animals and humans so it needs to be handled with extremely high safety precautions by professional chemical companies only. In this situation, the in-house systems that are used are similar to those for many other hazardous chemical intermediates. This is a typical risk assessment process for a chemical company and it is completely manageable.

The fact that Cr(III) can be oxidised under certain condition to a hazardous hexavalent form is a similar risk to that found with many other organic chemicals that are used in multiple applications. For this reason there is a need for a scientific risk assessment of the use of chromium for tanning leather in order to exclude these oxidations during normal conditions of use. This has been done in many scientific studies and these studies are the basis of legal requirements to protect consumers.

Starting mainly in the 1990s, studies have been carried out to fully understand the chemistry of chrome tanning, to evaluate the potential risk and to ensure a 100% safe use of chromium for tanning leather. Moreover, the United Nations Industrial Development Organization (UNIDO) has given clear recommendations on how to run a process to avoid any Cr(VI) contamination of the environment.
In particular, the leather manufacturing process was the basis of a thorough scientific study initiated by the European Commission and given the name “chrome6less”. The full results of this study are available on the internet, but the overall outcome could be summarised in one sentence: “The formation of chromium (VI) in finished leather can be prevented”. The leather industry has to make sure that these requirements are standard in the entire leather industry without any exception and without any disclaimer.

The chemistry of trivalent and hexavalent chromium

In order to manage any risk it is a precondition to understand the chemistry involved. In particular for leather, the trivalent and the hexavalent states of chromium are important.

In a dissolved form there is an equilibrium between the trivalent and the hexavalent form. This equilibrium is influenced by several factors, such as pH or concentrations. Cr(VI) is an extremely strong oxidising chemical, and this is one of the reasons for its hazard potential. Under the “normal”  conditions of a leather matrix with pH values of between pH 3.5 and 5.0, concentration of extractable Cr(III) of between 50 and 500 ppm, and temperature below 100°C, the equilibrium between chromium in Cr(VI) and Cr(III) forms is almost completely on the side of the safe Cr(III) form, as illustrated in Panel 2. Estimations regarding this equilibrium refer to a factor of significantly higher than 10,000:1. 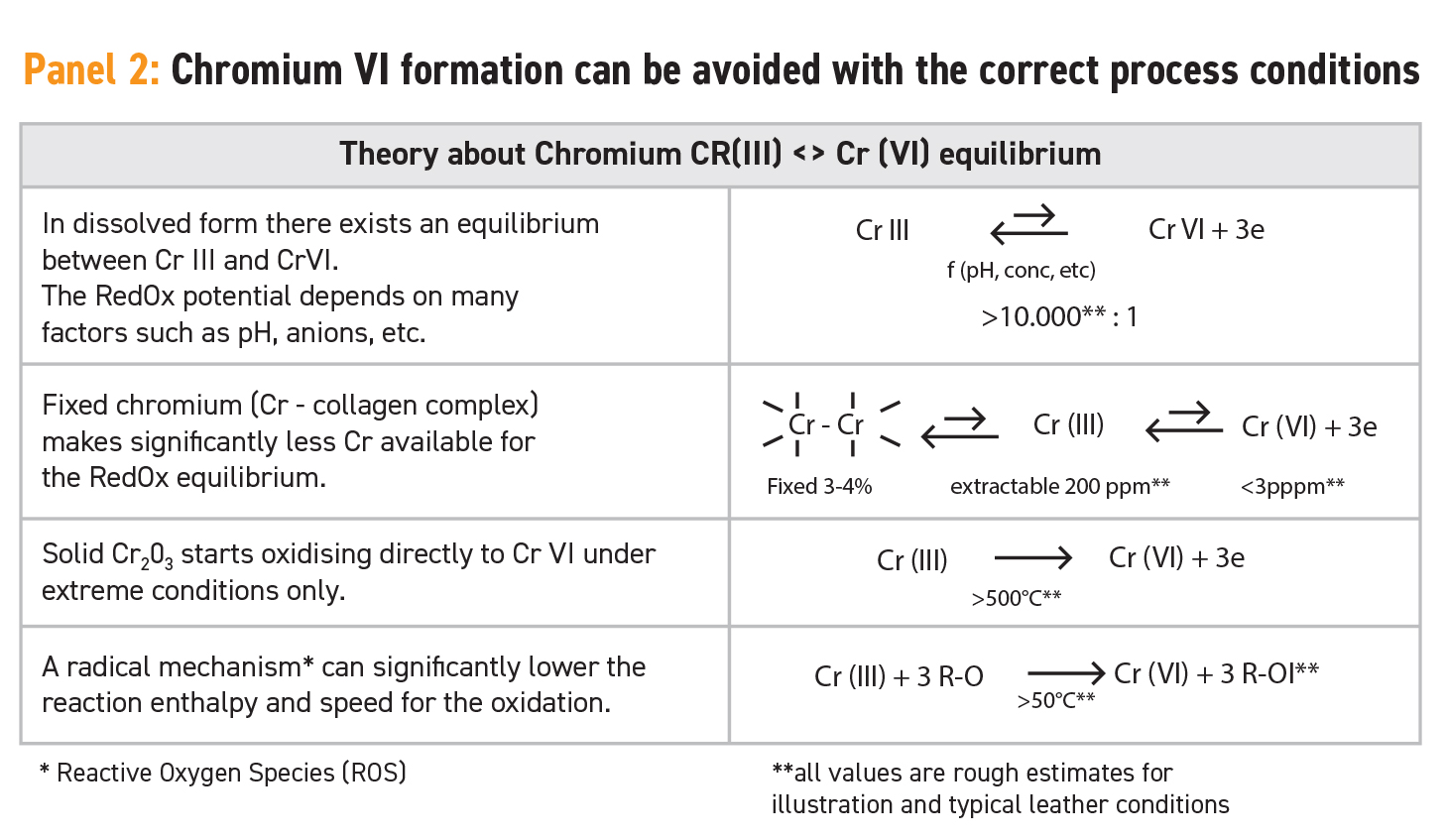 During the tanning process, most of the chromium in the hide is strongly fixed to the protein collagen. This phenomenon was the reason chromium was selected for this purpose in the first place and the reason chrome-tanning came to be the dominant method for making leather around the world. Once the hide is tanned and the chromium fixed to the leather fibre, the availability of chromium for the equilibrium between Cr(III) and Cr(VI) is dramatically reduced. Only chromium that can be extracted from this leather by washing with water (extractable chrome) is fully available for this equilibrium. In standard chrome-tanned leather there is a chromium content of between 3% and 4% fixed to the fibre and the standard value for extractable Cr(III) will be in a range of between 50 and 500 ppm, although it depends very much upon the recipe and the process conditions. These details are summarised in Panel 2.
This 50 to 500 ppm is the amount that is available for the equilibrium, and accordingly this leads to a safe Cr(VI) concentration in the leather, one that is far below the detection limit of 3 ppm. Concentrations that have been shown to cause a risk for the consumer are higher by some orders of magnitude.

Oxidation of Cr(III) to Cr(VI)

A direct oxidation of fixed Cr(III) to the hexavalent form under standard conditions is very unlikely because the reaction speed is extremely slow. Only at temperatures greater than 800°C would the oxidation reaction start shifting towards Cr(VI). This means that for normal leather and under consumer conditions there is no risk at all.

However, there is one important fact to consider where there is a potential risk: an indirect oxidation route via an intermediate of a reactive organic species (ROS). Within the leather industry, chemicals and conditions can be found that generate these free radicals, such as by ultraviolet light exposure or bleaching and cleaning procedures. These radicals can oxidise trivalent chromium into the hexavalent form, even under “normal” conditions.

These radicals could be generated by unsaturated chemical groups, which can be found in cheap or low-quality fatliquors, waxes and oils. In order to avoid such an oxidation reaction, either these troublesome chemicals should be avoided, or a certain amount of scavengers and antioxidant auxiliaries have to be built into the leather matrix. If these scavengers are available, then any radicals will be caught immediately after generation and irreversibly eliminated as they are transformed into stable components. These scavengers are a “built-in insurance” to avoid the formation of Cr(VI) through the indirect oxidation route. If these radicals are not present due to the avoidance of these chemicals, the much slower and more difficult oxidation process of trivalent chromium does not occur at all.

Chromium in the environment

If chromium is released into the environment, the same rules for an equilibrium will apply as with leather. Due to their strong oxidising power small amounts of any Cr(VI) will immediately react oxidatively with many of the organic components present in the environment. This means the Cr(VI) will become reduced to the safe form of Cr(III) according to the distribution of the equilibrium. In these small concentrations of Cr(VI) the process works like a “self-cleaning” mechanism.

However, as Cr(VI) is soluble, it could also be taken up by plants. In this situation the plant reacts in the same way and converts Cr(VI) into the safe form of Cr(III).

In the trivalent form in the environment, Cr(III) quickly ages to insoluble Cr(III) oxide. This is a final and fixed form of chromium under “normal” conditions, which, similar to the fixed form in leather, is no longer available for the equilibrium between Cr(III) and Cr(VI). In nature, the chemical system of different valency stages of chromium will automatically work against contamination from the hazardous form of Cr(VI). There is a belief that similar effects can be found if leather comes into contact with human sweat. The acid pH of sweat and the many microorganisms in sweat are a perfect environment to reduce any minuscule amounts Cr(VI) directly to harmless Cr(III). The stable form of Cr(III) is favoured as indicated in Panel 3. 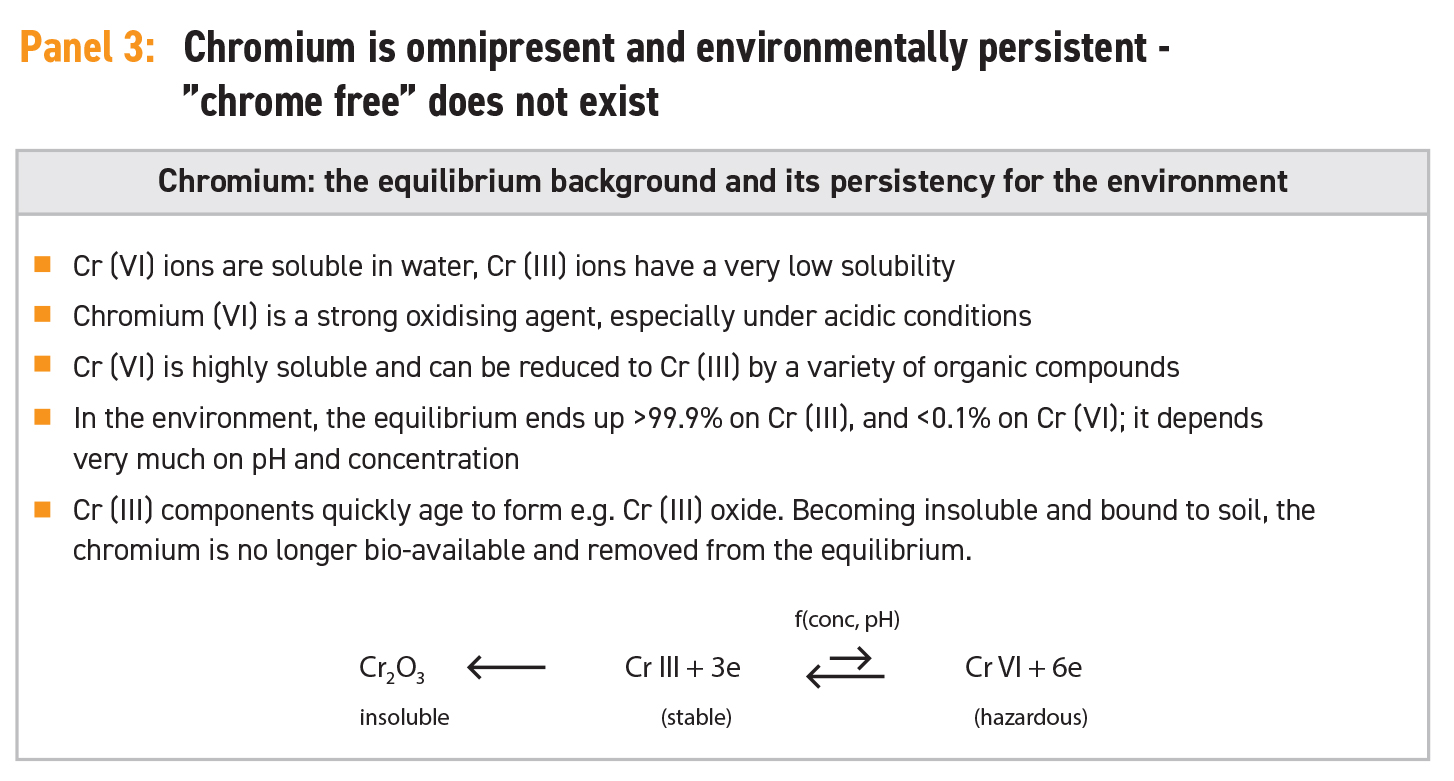 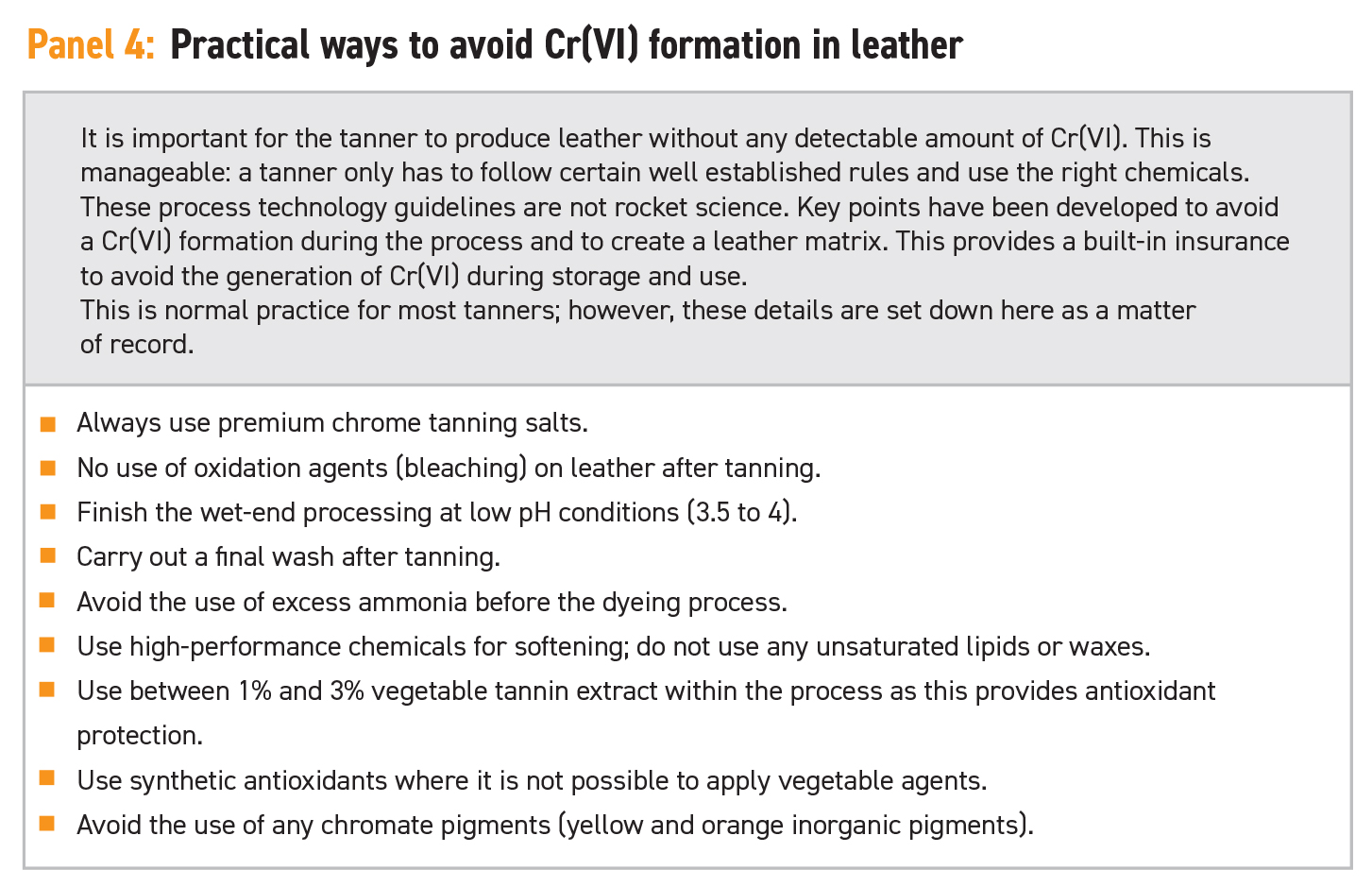