We set out the chemistry concerning the equilibrium of chromium in the trivalent [Cr(III)] and hexavalent [(Cr(VI)] forms in the updated version of essay number eight, the first two in the Nothing to Hide series that focus on chromium in leather manufacture. Based on this, a realistic assessment is set down here in essay nine concerning any risk that chromium in leather could pose to consumers. The original author of essays eight and nine, which we first published in 2015, was Dr Dietrich Tegtmeyer, vice-president of the International Union of Leather Technologists and Chemists Societies (IULTCS).

It is clear that trivalent chromium, Cr(III), the form of chromium used in leather manufacture, does not present any risk. This is stated in the REACh Annex XV Report, chapter B 5.8 (ECHA 2011). Cr(III) in the concentrations used in leather is not classified as sensitising, carcinogenic or mutagenic. Hexavalent chromium, Cr(VI), presents all three hazardous risks, even in small dosage amounts. It is a strong allergen, is toxic and is classified as carcinogenic and mutagenic Category I if inhaled. A summary of these details is set out in Panel 1.
If leather were to contain significant amounts of Cr(VI) there would be a potential risk, and this needs to be scientifically assessed.

It is important to understand the general logic regarding all harmful and hazardous chemicals. Many chemicals are classified as more or less hazardous, but to evaluate a true risk there is always a need to correlate the toxicity with the exposure of the chemical in its specific application. This is not specific to some hazardous chemicals—it applies to all chemicals. This is because, at some point of exposure, all substances can become harmful or even hazardous. This logic needs to be kept in mind when evaluating the toxicity of Cr(VI).

There is the classic example of table salt, sodium chloride. This chemical is necessary for life; however, in excess, it is hazardous to health and potentially even life-threatening. The same is true of essential vitamins. So, when considering if common salt or a specific vitamin is a health risk, it depends on the level of exposure. Our bodies cannot survive without salt or vitamins; it cannot survive without chromium either.

Based on animal studies there is always a lethal upper level and a lower “no effect” level, and these levels are defined. The life-threatening level, which is called the lethal dose (LD50 in mg/kg), is set by a 50% mortality rate when rats are fed with this dose level per kilo of body weight. The lower level is called the No Observed Adverse Effect Level (NOAEL), which marks the level of no toxicity concern.

Today, there is a reasonably good database available regarding the toxicity of Cr(VI). Most of this information is generated from studies based on mammals, and it is widely believed that these results are largely transferrable to humans. Based on this information, a simple calculation shows that if a piece of leather were to contain 10ppm of Cr(Vl), then the NOAEL and, particularly, the LD50 levels are far above any potential scenario that could be of concern to consumers. Theoretically, a person would have to eat 35 pairs of shoes with this level of contamination to be in an area above NOAEL and potentially be affected. It is reasonable to say that, based on science, an acute Cr(VI) toxicity risk from chromium-tanned leather can be excluded. It is far beyond any relevant consumer risk, and these details are summarised in Panel 2. 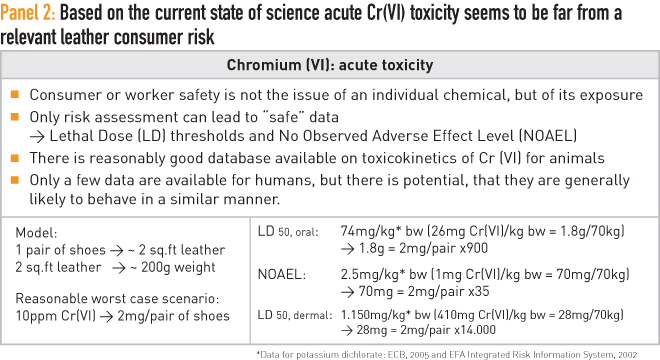 Carcinogenic and mutagenic risks of Cr(VI)

A different viewpoint is needed concerning the risk of carcinogenicity and mutagenicity. Here currently no NOAELs are defined, although a discussion around this is ongoing and involves the United States Environmental Protection Agency (EPA) and the European Chemicals Agency (ECHA). However, in the science of today it is simply seen as a “yes or no” fact if a chemical is classified as carcinogenic and mutagenic or not.

Based on these assessments Cr(VI) is rated as carcinogenic Category I, but only by inhalation. This means vapour, dust or smoke containing Cr(VI) is of relevance. This is an important safety fact for workers in the electroplating industry or for people who perform welding of stainless steel.

Regarding leather, a one-time exposure to smoke containing Cr(VI), such as might come from burning leather, would probably be comparable in terms of cancer risk to smoking a single cigarette or breathing diesel exhaust in a traffic jam. Even in such an extreme case, it is fair to say that, based on the current science, there is a minimal measurable risk of Cr(VI) carcinogenicity from the wearing of or even (in the case of babies, for example) having oral contact with chrome-tanned leather. These details are summarised in Panel 3. 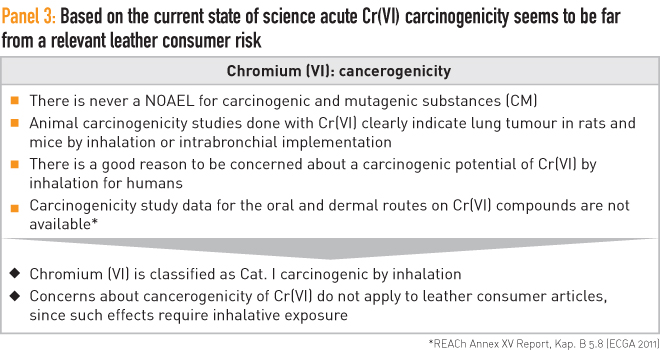 Cr(VI) as a sensitising allergen

Finally, there is the important issue of sensitisation, which we must discuss as Cr(VI) is known to be a strong allergen. This is set down in literature (Integrated Risk Information System, EPA: www.epa.gov/iris/subst/0144.htm), where in the first step of a possible contact (induction), Cr(VI) is absorbed into the skin and triggers the next step, an immune response (sensitisation).

Individuals that are sensitised will then exhibit an allergic contact dermatitis response when exposed to chromium above their threshold level. This threshold level (or the non-sensitising effect level) is in a range of several ppm of Cr(VI). This means that a sensitive person can theoretically be affected by leather, which contains these amounts of Cr(VI).

In reality, we can state that leather has been used as the main substrate for shoe manufacturing for millennia and for skin-contact leathergoods such as watchstraps for decades; scientific investigations have shown that the percentage of the population that is hypersensitive to Cr(VI) is low. It appears that there is a mechanism in place so that the risk of contact dermatitis is minimised.

One of the reasons for this could relate to an equilibrium between Cr(III) and Cr(VI), and environmental reduction, where trivalent Cr(III) is formed prior to contact and penetration of the skin. This equilibrium is discussed in Nothing to Hide essay eight. In the event of this mechanism, the remaining amount of Cr(VI) will be below an observed effect level. This is a possible and logical theoretical explanation based on scientific observations, although it is not yet proven to be scientifically correct.

As mentioned above, according to several scientific studies, the number of people that are hypersensitive to Cr(VI) is low.  Official numbers refer to 0.4 % of the population who may react to chromium. This is in the same range as sensitisation against many other metals. For example, allergic reactions to gold and nickel are respectively four times and more than 10 times higher than for Cr(VI). It is also a magnitude lower than allergic cases against certain foods, such as lactose. Known cases in today’s population are not a great concern, despite certain media claims. Standard leather manufacturing practices and technologies are known to avoid the formation of Cr(VI), although the subject should always be the focus of further research and development. An overview of this is given in Panel 4. 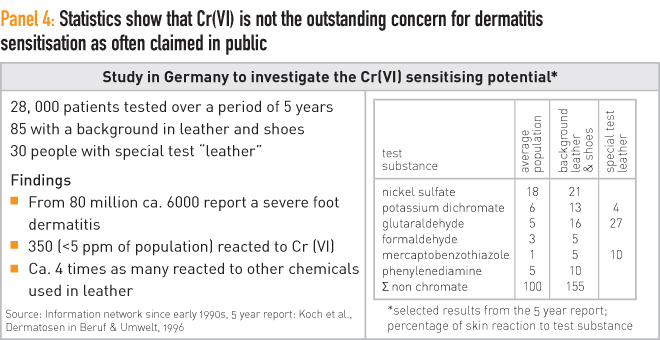 The detection of Cr(VI)

It is the objective of leather manufacturers to protect consumers from Cr(VI) exposure by producing leathers that are free of Cr(VI). Every detection method proposed so far applies to extracts from a sample of leather.

In the test procedures, a phosphate-buffered solution at pH 8, as set down in ISO 17075, has been selected to avoid any reduction of Cr(VI) during extraction. If, however, the leather contains traces of oxidising substances in parallel with chromium it is possible that the oxidation only takes place in the extract. In this event, the result of the determination does not indicate the concentration of Cr(VI) in the leather itself but the concentration of the oxidiser, thus producing a false high reading.

This means that the concentration in one of those extracts is not necessarily identical to the situation in the leather. Moreover, if the conditions from ISO 17075 are applied to the analysis, it is important that the extractions are assessed at their real concentrations and not diluted. This pre-condition does not change, even if a detection method is applied that is more sensitive than the current means of determination. It is also important to recognise that the minimum detection value from this analysis is 3 ppm, so any values set below this limit are not detectable.

This essay aims to set out a balanced, scientific view on potential risks of chromium in leather, and contradicts many opinions that have been reported. Regarding Cr(III), the report REACh Annex XV Report, Chapter B 5.8 (ECHA 2011), states that there are no reasonable issues with Cr(III) in leather.

According to a scientific investigation by the EU, (Chrome6less project: see Nothing to Hide essay eight), the formation of chromium (VI) in finished leather can be efficiently prevented using standard technologies that are available to every tanner. Even if small amounts of Cr(VI) are found in leather, modelling clearly shows that any consumer risk in terms of toxicity and cancer can be excluded. Moreover, the results from possible exposure scenarios are far below any detectable risk for a consumer wearing a garment made out of a leather substrate.

There remains a potential allergy risk for a small percentage of the population if leather were to contain some Cr(VI). But it should be remembered that leather has remained as a material of choice for consumer applications for many centuries, and throughout this time there has been a high level of direct contact between leather and people’s skin. In this situation, the level of chromium hypersensitivity cases is very low and less than the number of cases of a reaction to many other common products, including gold, nickel, some food ingredients, grass, or special organic compounds.

Credits
The two Nothing To Hide essays on chrome are based on a presentation entitled Chromium and Leather Research: A balanced view of scientific facts and figures. This was presented to the International Union of Leather Technologists and Chemists Societies (IULTCS) Congress, Istanbul 2013, by Dr Dietrich Tegtmeyer. We also acknowledge and are grateful for the contribution Dr Martin Kleban made to both essays.